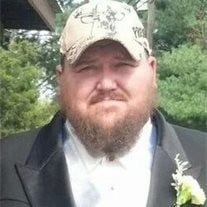 Forest “JJ” Junior Jones II, 39, of Jonesville, KY, passed away on Tuesday, August 5, 2014. Born in Covington, KY on December 24, 1974, he was the son of Emily Bishop and Forest Junior Jones I. A 1994 graduate of Conner High School, he worked as a welder for ESCO in Covington, KY. On April 27, 2007, he married Carrie Ebert Jones. Together they loved spending time with family and friends, riding four-wheelers, and taking care of the horses and donkeys. He was a friend like no other whose short life touched many others. In addition to his wife of 7 years, Carrie, he is survived by his son, Corbin Ebert Jones; his father, Forest Junior Jones I of Dry Ridge, KY; his mother, Emily Bishop of Dry Ridge, KY; his only sister, Christine (Edward) Noeller of Augusta, Kansas, and their children: Hadleigh, Bayleigh, Brady, and Hunter; cousins, who thought of him as their brother: Jimmy, Morris, and David Jones; several other cousins, nieces, nephews, a host of extended family, and friends. The visitation will be from 5-8 pm on Friday, August 8, 2014, at the Woodhead Funeral Home, Falmouth, with a celebration of his life beginning at 8 pm. Memorials are suggested to the Corbin Jones Benefit Account, c/o any Bank of Kentucky location.

The family of Forest 'JJ' Junior Jones II created this Life Tributes page to make it easy to share your memories.