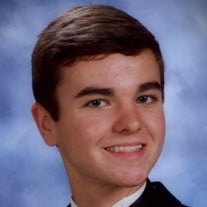 Garrett Stephen Spence, 21, of Falmouth, KY, passed away on Wednesday, April 8, 2015, at the University of Kentucky Medical Center in Lexington, KY. Born in Campbell County, KY, on December 28, 1993, he was the oldest son of Allen Wayne and Paula Gail Delaney Spence. Garrett attended St. Edward School from kindergarten through the 8th grade and graduated in the top twelve of his class from Pendleton High School in 2012. During high school, he worked at Wyatt’s Super-Valu in Falmouth. During the summers he worked for Florence Winnelson and 3M Company. While in college, he was a maintenance man with American Campus Communities. Garrett was in his junior year at the University of Kentucky studying mechanical engineering, and he was loved by all who knew him. His life centered around his family and his friends, always going the extra mile for others. He was a member at St. Francis Xavier church, where he served as an altar boy and always took part in parish activities. Garrett was preceded in death by his brother, Landen Joseph Spence on November 2, 2003, and his uncle, Stephen Allen Delaney on August 28, 1989. He is survived by the couple blessed to be his parents, Allen and Paula Spence of Falmouth, KY; his two brothers: Mynor Alexander and Rylee Luis Spence; his maternal grandparents, Joe Paul and Janet Delaney of Falmouth, KY; his paternal grandparents, Bill and Mildred Spence of Falmouth, KY; the love of his life, Kelly Bloomfield of Falmouth, KY; and a host of aunts, uncles, cousins, extended family and friends. Mass of Christian Burial will be held at 2:00 p.m. on Saturday, April 11, 2015, at the St. Francis Xavier Catholic Church in Falmouth, with Rev. Douglas Lauer officiating. The pallbearers will be Bradley Willis, Shawn Ravenscraft, Brian Jenkins, Daniel Slover, Zachary Brinkman, Zachary Torline, Aaron Bevins, and Kevin Schmidt. Special music will be shared by Martha Lynn, Karen Delaney, and Darryl Ammerman. The visitation will be from 10-2:00 p.m. at the church. Interment will take place in the St. Francis Xavier Cemetery, Falmouth. Memorials are suggested to the Landen Joseph Spence Foundation, c/o Fifth Third Bank, 280 U.S. 27, Falmouth, Kentucky 41040, in memory of his younger brother and the Stephen Delaney Scholarship Fund c/o Kim Jenkins, 3160 Ed Monroe Road, Falmouth, KY 41040, in memory of his uncle and namesake, Stephen Allen Delaney. Woodhead Funeral Home, Falmouth, is serving the family.     var item = document.getElementById("tukios_iframe"); // Now calculate our height. if (item){ //Looks like we have tukios_iframe. Lets do stuff var currentWidth = item.clientWidth; var proposedHeight = (currentWidth + 80) * 9/16; item.height=proposedHeight; } PDF Printable Version

Garrett Stephen Spence, 21, of Falmouth, KY, passed away on Wednesday, April 8, 2015, at the University of Kentucky Medical Center in Lexington, KY. Born in Campbell County, KY, on December 28, 1993, he was the oldest son of Allen Wayne and... View Obituary & Service Information

The family of Garrett Stephen Spence created this Life Tributes page to make it easy to share your memories.

Garrett Stephen Spence, 21, of Falmouth, KY, passed away on Wednesday,...

Send flowers to the Spence family.