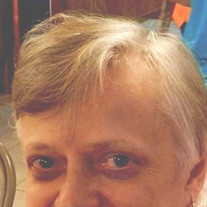 Georgia “Faye” Halcomb, 65, of Falmouth, KY, passed away on Sunday, March 8, 2015, at her home. Born in Campton, Kentucky on September 9, 1949, she was a daughter of the late George and Pearl Pelphrey Bumgardner. On October 11, 1965, she married Richard Halcomb, Sr., and her dear husband survives her passing. Faye was a homemaker, an aid with Grant Manor Nursing Home in Williamstown, KY for five years, a driver for Meals on Wheels for 3 years, and a member of the New Zion Baptist Church. In addition to her parents, she was preceded in death by a son, Douglas Loren Halcomb on October 3, 2003. In addition to her husband of 49 years, Richard, she is survived by three children: Bro. Richard “Rick” (Lisa) Halcomb, Jr., Michael (Sherry) Halcomb, and Damien (Robin) Halcomb; 6 grandchildren: Zachary Allen Halcomb, Kia, Krystal, Kaylee, Jessica, and Aaron Owen; several great grandchildren; one sister, Virginia R. Rice of Lexington, KY; her mother-in-law, Ruby Halcomb of Campton, KY; special friends who have helped in countless ways to support and care for Faye and the family: Damian Marshall, Randy Wyatt, David Steele, Shannon Oliver, Mark and Marty Hart, Leva and Andrew Kidd, Roger Colvin, Michael English, Sam Fields and family, and Terry Gooden. A memorial service will be held at 1 pm on Thursday, March 12, 2015, at the Woodhead Funeral Home, Falmouth, with Donnie Spencer officiating. Friends and family are invited to gather from 11-1 pm preceding the service at the funeral home. Memorials are suggested to the Pendleton County Animal Shelter.

The family of Georgia 'Faye' Halcomb created this Life Tributes page to make it easy to share your memories.

Send flowers to the Halcomb family.