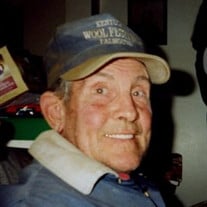 Gilbert “Gib” Randall Moore, 85, of Berry, KY, passed away on Monday, February 16, 2015, at the Grand Haven Nursing Home in Cynthiana. Born in Harrison County, KY on December 19, 1926, he was the son of the late Thomas Franklin (T.F.) and Vogal Emma Pugh Moore. He married Dorothy Hallene Milner, and his dear wife preceded him in death on June 12, 1994. In addition to his parents and wife, he was preceded in death by his sister, Effie Fern Fisher on July 4, 2013. He was a well-known Harrison County farmer, a factory worker with Grady, Eaton, and the former Fuller’s Manufacturing, a U.S. Army veteran, and a member of the Boyd United Methodist Church, Harrison County. He is survived by his daughter, Tracy (Jeff) Winkle of Berry, KY; his son, Roy Jett of Mt. Sterling, KY; several grandchildren; several great grandchildren; and a host of extended family and friends. The funeral service will be held at 11 AM on Friday, February 20, 2015, at the Woodhead Funeral Home in Berry, KY, with Keith Mitchell officiating. The pallbearers will be Greg Courtney, Kevin Courtney, Charlie Courtney, Jimmy Courtney, Joe Chambers, and David Winkle. The honorary pallbearers will be Jr. Courtney, Ernie Cummins, Elmer Reed, and Eddie Ray Fisher. The visitation will be from 5-8:00 PM on Thursday, February 19, 2015 at the funeral home. Interment will take place in the Pythian Grove Cemetery in Berry, with full military honors by the Hardin- Browning Post #109. Memorials are suggested to the charity of your choice.

The family of Gilbert 'Gib' Randall Moore created this Life Tributes page to make it easy to share your memories.