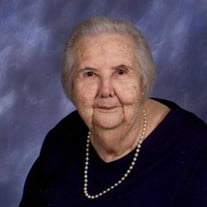 Ida Mildred Powell, 89, of Falmouth passed away on Thursday, September 1, 2011 at St. Elizabeth, Ft. Thomas, Ky. Born on May 19, 1922 in Harrison County, KY; she was the daughter of Charlie Henry Turner and Gracie Simpson (Whalen) Turner. She... View Obituary & Service Information

The family of Ida Mildred Powell created this Life Tributes page to make it easy to share your memories.

Ida Mildred Powell, 89, of Falmouth passed away on Thursday,...

Send flowers to the Powell family.