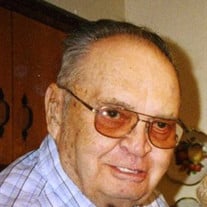 Biography J. L. Beyersdoerfer, 85, of Foster, Kentucky, passed away on Tuesday, June 9, 2009, at the River Valley Nursing Home in Butler. Born in Bracken County, Kentucky on October 25, 1923, he was a son of the late John and Nellie Cox Beyersdoerfer. On February 28, 1947, he married Sally Insko, and his dear wife survives his passing. For over 20 years he was a rural mail carrier in Foster and California, Kentucky. He was also a farmer. He owned and operated the Washington Trace Feed Mill, and he was a bee keeper. He was a member of the Pine Grove United Methodist Church, Pendleton County, a member of the Augusta F & A M # 80, a member of the Order of the Eastern Star #362 of Augusta, and a Kentucky Colonel. In addition to his parents, he was preceded in death by two sisters: Ada Browning and Freida Watts, and a brother, Bill Beyersdoerfer. In addition to his wife of 62 years, Sally Insko Beyersdoerfer, he is survived by his daughter, Connie (Steve) McKinney of Lexington, Kentucky; his son, Steve (JoAnn) Beyersdoerfer of Foster, Kentucky; 4 grandchildren: Kerry (Tim) Graul, Stephanie McKinney, Kate Beyersdoerfer, and Betsy Beyersdoerfer; one great grandson, Benjamin; and a host of extended family and friends. Funeral services will be held at 11:00 a.m. on Saturday, June 13, 2009, at the Woodhead Funeral Home, Falmouth, with Carol Mains officiating. The visitation will be from 5-8:00 p.m. on Friday at the funeral home with a Masonic service at 7:00 p.m. Interment will take place in the Lenoxburg Cemetery, Bracken County. Memorials are suggested to the River Valley Nursing Home Activity Fund, 305 Taylor Street, Butler, Kentucky 41006 or the American Diabetes Association, 644 Linn Street, Suite 304, Cincinnati, Ohio 45203. Online condolences can be sent to the family at www.woodheadfuneralhome.com

The family of J L Beyersdoerfer created this Life Tributes page to make it easy to share your memories.

Send flowers to the Beyersdoerfer family.