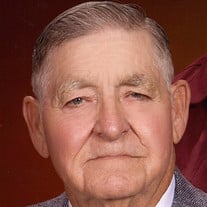 James Earl King, Sr., 85, of Falmouth, KY, passed away on Friday, January 12, 2018, after a long illness. Born on July 11, 1932 in Warsaw, KY, he was a son of the late Jess and Pauline Owens King. On March 29, 1952, he married Greta Fern Lancaster King, and his dear wife preceded him in death on November 13, 2014. A 38 year employee of Interlake and Newport Steel, “Jim” was a member and deacon of the Falmouth Baptist Church, and he faithfully served his country in the U.S. Army during the Korean War. He is survived by four children: Ricky (Nancy) King, David (Kim) King, Gary (Ruth) King, all of Falmouth, KY, and Karen (Kenny) Schlueter of Florence, KY; his daughter-in-law, Carolyn King of Falmouth, KY; 10 grandchildren; 9 great grandchildren: three sisters: Irma Pribble of Taylor Mill, KY, Judy (Al) Hickey of New Lebanon, OH, and Rita Bellopatrick of Whitmore Lake, MI; one brother, Jack King of Eaton, OH; and a host of extended family and friends. In addition to his parents and his wife, he was also preceded in death by his son, James E. King, Jr. on October 26, 2015. Funeral services will be held at 2 pm on Monday, January 15, 2018, at the Woodhead Funeral Home, Falmouth, with Bro. Cohen Copley officiating. The visitation will be from 12-2 pm on Monday preceding the service at the funeral home. Interment will take place in the Riverside Cemetery, Falmouth, with full military honors by the Hardin-Browning Post #109. Memorials are suggested to the Falmouth Baptist Church: 403 Maple Avenue, Falmouth, KY 41040.

The family of James Earl King, Sr. created this Life Tributes page to make it easy to share your memories.

Send flowers to the King, family.