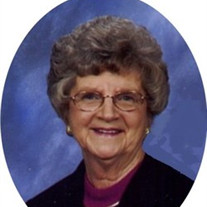 Jo Bowen Ross, 79, of Gardnersville, KY, passed away on Wednesday, September 30, 2015, at the St. Elizabeth Health Care in Edgewood. Born on June 10, 1936 in Gardnersville, she was a daughter of the late L.E. “Brooker” and Velma Greenwell Bowen. A 1954 graduate of Butler High School, Jo enrolled in the Miller School of Business in Cincinnati and later went to work at Union Central Life Insurance Company. On April 14, 1956, she married Arnold Ross, and together they owned and operated Bowen Farm Supply, the farm equipment business in Gardnersville started by her father, “Brooker” Bowen in 1927. She was an active member of the Violet Ridge Church of Christ in Crittenden, KY. She and Arnold shared a passion for mission work. Affectionately known as “Mother” by many friends, Jo lived her faith every day, and she was happiest when she was doing something for someone else. Many family and friends will cherish her handwritten cards and notes. In addition to her parents, she was preceded in death by her son, Mark Ross on April 11, 2015, her grandson, Evan Michael Ross on June 20, 1991, and her son-in-law, Robbie Thornberry on January 9, 2009. In addition to her husband of 59 years, Arnold, she is survived by three children: Kim Ross Thornberry of Gardnersville, Matt (Judy) Ross of Gardnersville, and Brad (Cheryl) Ross of Butler; her daughter-in-law, Lecia Ross of Falmouth; 6 grandchildren: Jason (Jessie) Rebholz, Doug Rebholz, Monica Ross, Eric Ross, Brandon Ross, Johnathan (Dawn) Thornberry; 4 great grandchildren: Dakota Rebholz, Clayton Rebholz, Ella Thornberry, and Noah Thornberry; 2 special great grandchildren: Myka Brown and Jaxon Brown; 2 sisters: Jane (Keith) Johnson of Gardnersville, and Sue Bradford of Lexington; and a host of extended family and friends. A celebration of her life will be held at 11:00 a.m. on Monday, October 5, 2015, at the Violet Ridge Church of Christ, 1000 Violet Road, Crittenden, KY 41030, with Minister Dave Shanklin officiating. Her visitations will be on Sunday, October 4, 2015, from 4 to 9 at her church and on Monday from 10 to 11 preceding the service at the church. Interment will take place in the Gardnersville Cemetery, Pendleton County. Memorials are suggested to Disciple Makers, 4393 Boron Drive, Latonia, KY 41015 or the Violet Ridge Church of Christ.

The family of Jo Bowen Ross created this Life Tributes page to make it easy to share your memories.

Jo Bowen Ross, 79, of Gardnersville, KY, passed away on Wednesday,...

Send flowers to the Ross family.