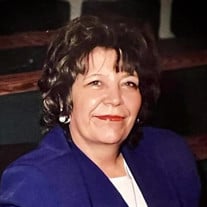 Joyce Ann Howard Fryman, 75, of Berry, KY, passed away on Thursday, March 31, 2022, at St. Elizabeth Health Care in Edgewood, KY. Born on April 23, 1946 in Harrison County, KY, she was the daughter of late Wilmer Chuck and Alean Kidwell Howard. A 1964 graduate of Harrison County High School, she married Jyon Fryman on July 17, 1965, and together they farmed and brightened the lives of family and friends for 56 years. Previously Joyce worked at Harrison County Middle School and “The Cynthiana Democrat.” Joyce loved to sing, whenever the opportunity presented itself. She had an incredible voice combined with a natural ability to harmonize, and her son Michael learned to sing from listening to his mother. Joyce spent countless hours singing at home while Jyon played the guitar. Always smiling and finding joy in her journey, Joyce enjoyed spending time with family and friends. In addition to her parents, she was preceded in death by her son Ricky Marlin Fryman; and three brothers: Bobby Howard, Gary Howard, and Wilmer Glenn Howard. She is survived by her loving husband and best friend Jyon Fryman; her son Michael Fryman of Louisville, KY; her niece Misty Howe; and a host of extended family and friends. Funeral services will be held at 2 pm on Thursday, April 7, 2022, at Woodhead Funeral Home, Berry, with Shane Hammons officiating. The visitations will be from 5-8 pm on Wednesday, April 6, 2022 at the funeral home and on Thursday from 1-2 pm preceding the service. Interment will take place in the Pythian Grove Cemetery, Berry. Memorials are suggested to the American Cancer Society, c/o Harrison County Relay for Life.

The family of Joyce Ann Howard Fryman created this Life Tributes page to make it easy to share your memories.

Send flowers to the Fryman family.