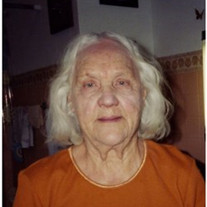 Julia Blanche Garrison Jones, 98, of Cynthiana, passed away on Wednesday, July 22, 2015, at the Harrison Memorial Hospital in Cynthiana. Born on May 24, 1917 at Wagoner’s Chapel, she was the last child of the late Alvah Newton Garrison and Nettie Richey Garrison. She was a farmer, homemaker, and a member of the Wagoner’s Chapel United Methodist Church, Harrison County; she loved God, family, gardening, flowers, and playing and singing with her guitar. She was a wonderful cook, having prepared numerous meals for the tobacco hands. She married Willard Hartley Jones on May 18, 1943, and he preceded her in death on January 4, 1981. She was also preceded in death by a son, Lanny Keith in infancy in 1946; by her brothers: Herbert, Carl, Everett, Earl, Jesse, Shirley, Stanley and Sam Garrison and Johnnie King; and by her sisters: Gracie Burdon, Edna Harney, and Lena Garrison; and by her beloved cat Missy. She is survived by her daughter and son-in-law, Deborah Sue and Eddie Crump of Cynthiana; Eddie’s 7 children, grandkids, and great grandkids; sisters-in-law, Annabelle Garrison of Wilmore, Shirley Catherine Garrison of California, KY, and Virginia Jones of Cynthiana; several nieces, nephews, friends, and neighbors; and her loving cat Rustee. The funeral service will be held at 3:00 p.m. on Monday, July 27, 2015, at the Woodhead Funeral Home, Falmouth. The visitation will be from 1-3:00 p.m. preceding the service at the funeral home. Interment will take place in the Riverside Cemetery, Falmouth. Memorials are suggested to the Wagoner’s Chapel United Methodist Church.

Julia Blanche Garrison Jones, 98, of Cynthiana, passed away on Wednesday, July 22, 2015, at the Harrison Memorial Hospital in Cynthiana. Born on May 24, 1917 at Wagoner&#8217;s Chapel, she was the last child of the late Alvah Newton Garrison... View Obituary & Service Information

The family of Julia Blanche Garrison Jones created this Life Tributes page to make it easy to share your memories.

Julia Blanche Garrison Jones, 98, of Cynthiana, passed away on...