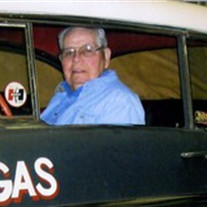 Biography Kenneth Brown, 83, of Berry, Kentucky, passed away on Wednesday, March 11, 2009, at the Cedar Ridge Health Campus in Cynthiana. Born on May 22, 1925 in Harrison County, Kentucky, he was a son of the late Jesse Grant and Willie Gertrude Leach Brown. On January 22, 1948, he married Georgena Gillespie and his dear wife survives his passing. He had worked as a dock worker with Consolidated Freight in Cincinnati, Ohio and as a farmer. He was a member of the Marcus Crooked Creek Baptist Church, Berry, a member of the Masonic Lodge and the Indra Consistory Scottish Rite, 32nd degree. In addition to his parents, he was preceded in death by four siblings. In addition to his wife of 61 years, Georgena Gillespie Brown, he is survived by two sons: Barry Gene Brown of Berry, Kentucky and James Kenneth Brown of Falmouth, Kentucky; two daughters: Evea Lou Green and Paula Jo Hamilton, both of Berry, Kentucky; 7 grandchildren; 10 great grandchildren; 3 brothers: Ben Brown of Williamstown, Kentucky, Bob Brown of Ft. Mitchell, Kentucky, and Floyd Brown of Richwood, Kentucky; and 4 sisters: Betty Robinson of Elsmere, Kentucky, Jeannie Kinman of Dry Ridge, Kentucky, Beulah Thompson of Berry, Kentucky, and Anna Mary Brown of Florida. Funeral services will be held at 11:00 a.m. on Saturday, March 14, 2009, at the Woodhead Funeral Home, Berry, with Bro. Jeremy Northcutt and Bro. Paul Conrad officiating. Masonic rites will be conducted during the funeral service. There will be no visitation. The pallbearers will be Ben Brown, Bob Brown, Buck Brown, Jim Gillespie, Steve Kiplinger, and Robert English. Interment will take place in the Pythian Grove Cemetery, Berry. Memorials are suggested to the Marcus Crooked Creek Baptist Church, Berry. Online condolences can be sent to www.woodheadfuneralhome.com

The family of Kenneth Brown created this Life Tributes page to make it easy to share your memories.

Send flowers to the Brown family.