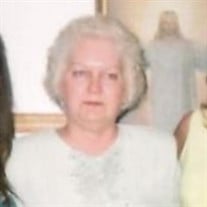 Linda Carol Taylor Williams, 77, of Falmouth, KY, passed away on Thursday, January 27, 2022 at her home. Born on June 3, 1944 in Augusta, KY, she was a daughter of the late Glenn and Neppie Dennis Taylor. On June 19, 1965 she married Adarin Williams and he survives her passing. She was a member of the Falmouth United Methodist Church, and a former babysitter and AVON Rep. Linda was a wonderful mother and grandmother. She was a very private person but enjoyed her trips to the Dollar Stores in Falmouth. In addition to her husband Adarin, she is survived by 2 children; Angela (Robin) Hampton of Falmouth, KY, Shawn Williams of Falmouth, KY, 3 grandchildren; Jarrod Haley, Shane Christopher Hampton, Ethan Tyler Hampton, 5 great grandchildren, a brother; Dennis (Barb) Taylor of Blue Ash, OH, a sister; Diana (Ronnie) French of Maysville, KY, and several nieces and nephews. She was preceded in death by 4 siblings: Wes England, Tony Taylor, Joan Kelly, and Bonnie Newby. Funeral services will be held on Monday, January 31, 2022 at 1:00 P.M. at Woodhead Funeral Home in Falmouth with Bro. Harry Crozier officiating. Burial will follow in the Riverside Cemetery. The visitation will be held from 10-1:00 preceding the service. Memorial contributions are suggested to First Baptist Church: P.O. Box 311, Falmouth, KY 41040

The family of Linda Carol Williams created this Life Tributes page to make it easy to share your memories.

Send flowers to the Williams family.