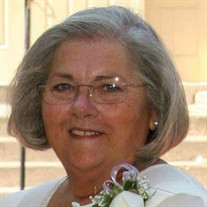 Mary Kay Frazier (nee Thornberry), 70, of Cold Spring, KY passed away on May 6th,2021 surrounded by her loved ones. Mary Kay was born May 18th, 1950 to parents John and Judy (Colvin) Thornberry in Falmouth, KY. She grew up on a farm in Butler and graduated in the top of her class from Pendleton County Highschool. She married Richard Frazier in January of 1975 and over the years, gave birth to four beautiful Daughters. Mary Kay and Richard later divorced, but remained close as a family. She enjoyed reading, sewing, crafting, puzzles, shopping, watching UK basketball games, cooking and traveling – she called the beach trips with her family her “happy place”. Mary Kay was a fiercely dedicated Mother to her four girls, raising all of them to go on to have successful careers. She was often called “Mom” by her Daughter’s friends because she cared for them like her own children. For over 20 years, she worked full-time as a dedicated Business Manager for Fisher Design in Cincinnati, OH. Mary Kay was most proud of her nine Grandchildren and led a very active life attending their various activities, cheering them on and filling her family with love and joy. Mary Kay was proceeded in death by her Parents, John and Judy Thornberry, and her Brother, Robert Thornberry. She is survived by her Sister, Linda Phillips (nee Thornberry), her four Daughters, Tiffany Frazier (Mike Hutchison), Amber Geyer (Charlie), Natalie Conforti (James), Summer Patterson (Larry), nine Grandchildren, Morgan Pitzer, Mason Pitzer, Mitchell Hutchison, Landon Geyer, Sophia Geyer, Judy Conforti, Jimmy Conforti, Piper Patterson, Kayden Patterson, many Nieces and Nephews and countless friends. Services will be held on Wednesday, May 12th at St. Cecilia Church in Independence, KY. Visitation from 10am-3pm with Funeral Mass following at 3pm. A Celebration on Life tribute will take place at 2:40. The family requests that any memorials be sent to St. Elizabeth Hospice Care, Edgewood KY. Online condolences can be made at www.woodheadfuneralhome.com

Mary Kay Frazier (nee Thornberry), 70, of Cold Spring, KY passed away on May 6th,2021 surrounded by her loved ones. Mary Kay was born May 18th, 1950 to parents John and Judy (Colvin) Thornberry in Falmouth, KY. She grew up on a farm in Butler... View Obituary & Service Information

The family of Mary Kay Frazier created this Life Tributes page to make it easy to share your memories.

Send flowers to the Frazier family.