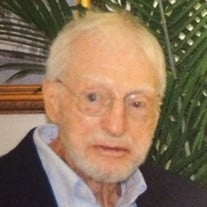 Maurice Patrick “Pat” Crotty, in his 90th year of age, of Pittsburgh, PA and Falmouth, KY, passed away on February 15, 2014 after a series of illnesses. Beloved husband of 58 years of the late Helen (VonLehmen) Crotty. Born in Falmouth, KY on June 9, 1924 to the late Thomas R. and Mary (Hayes) Crotty. He will be remembered as a devoted and loving husband, father, grandfather and uncle. Survived by five children Colleen Mary Brennan (Paul) of Carlisle, MA, Thomas Joseph Crotty (Patricia) of Reading, PA, Mary Therese Sharma (Anurag) of Amherst, MA, Elizabeth Anne Crotty of Charlottesville, VA, and Sr. Sarah Bernadette Crotty, CSJ of Pittsburgh, PA and seven grandchildren, Thomas, Patrick and Catherine Brennan, Daniel and Anna Crotty, and Helen and Monika Sharma of Amherst, MA. He was preceded in death by three brothers, Thomas, Joseph, and William, and one sister, Mary Jean Schmidt. His is survived by two sisters, Colette Daugherty of Ft. Mitchell, KY, and Julie Landry of Arlington, TX and many beloved nieces and nephews. Pat graduated from Falmouth High School in 1942 and earned a bachelor’s degree (1950) and later a master’s degree in business administration from Xavier University, Cincinnati, OH. He and his three brothers served in WWII. Pat worked for Newport Steel, IBM and Textron among other organizations, and retired in 1986 from his position as vice-president for labor relations with Rockwell International Corporation. During his retirement he enjoyed spending time with his family at his farm in Kentucky, and winters in Florida with Helen. He did volunteer service in prison ministry and nursing homes. He and Helen were benefactors of Our Savior Church Catholic Parish in Covington, KY. He was a passionate Pittsburgh Steelers fan. The funeral Mass of Christian Burial will be held at 2:00 PM on Saturday, February 22, 2014, at St. Francis Xavier Catholic Church, 202 W. Second Street, Falmouth, KY. His good friend, Fr. Louis Dickmann, will preside. There will be visitation at the church prior to the funeral Mass beginning at 1-2 PM. Burial will follow at St. Francis Xavier Cemetery, Falmouth. Funeral arrangements are being handled by Woodhead Funeral Home of Falmouth, and online condolences can be sent to the family at www.woodheadfuneralhome.com In lieu of flowers, memorial donations may be given to Our Savior Catholic Parish, c/o Sr. Janet Bucher, CDP, 246 E. 10th St., Covington, KY 41011. The family wishes to give special thanks to the UPMC Presbyterian Hospital staff, Dr. Asher Tulsky, Guardian Angels, Vincentian Home, Woodhead Funeral Home, and St. Frances Xavier Parish.

Maurice Patrick &#8220;Pat&#8221; Crotty, in his 90th year of age, of Pittsburgh, PA and Falmouth, KY, passed away on February 15, 2014 after a series of illnesses. Beloved husband of 58 years of the late Helen (VonLehmen) Crotty. Born in... View Obituary & Service Information

The family of Maurice Patrick 'Pat' Crotty created this Life Tributes page to make it easy to share your memories.

Maurice Patrick “Pat” Crotty, in his 90th year of age, of Pittsburgh,...