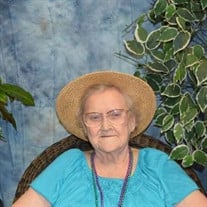 Mildred Wagner Golden, 92, of Augusta, KY , passed away on Thursday, May 23, 2019, at the Bracken County Nursing and Rehabilitation Center in Augusta. Born on December 28, 1926 in Pendleton County, Kentucky, she was the daughter of the late William J. and Alma Miles Wagner. On December 13, 1943, she married Crit Golden, and her dear husband of 52 years preceded her in death on April 14, 1998. Mildred was a homemaker and she farmed right alongside her late husband, Crit. Mildred raised a huge garden as long as she was able, and she loved her family dearly. She was a member of the Second Twelve Mile Baptist Church, Pendleton County, and she attended the Chatham Christian Church when she moved to Bracken County. She is survived by four children; Gene Thomas “Tom” (Nicey) Golden of Cannon, KY, Carol Ann (John) McCarty of Foster, KY, Peggy (the late Larry) O’Brien of Brooksville, KY, and Rick Lee (Jeannetta) Golden of Brooksville, KY; 19 grandchildren; numerous great grandchildren; one sister, Aleene Hendy of Falmouth, KY; and a host of extended family and friends. In addition to her parents and husband, she was also preceded in death by two sons: Marvin Ray Golden in 1977 and Jeffery Wayne Golden in 2015; three sisters: Ruth Mains, Velma Powell, and Hazel Chatham; and brothers: Bill Wagner, Charles “Jeff” Wagner, Leslie “Mutt” Wagner, Herb Wagner, Marvin Wagner, and John Wagner. Funeral services will be held at 11 am on Wednesday, May 29, 2019, at the Woodhead Funeral Home, Falmouth. The visitation will be from 5-8 pm on Tuesday at the funeral home. Interment will take place in the Mt. Vernon Cemetery, Pendleton County. Memorials are suggested to the Bracken County Nursing and Rehabilitation Center Activity Fund: 5269 Asbury Road, Augusta, KY 41002.

Mildred Wagner Golden, 92, of Augusta, KY , passed away on Thursday, May 23, 2019, at the Bracken County Nursing and Rehabilitation Center in Augusta. Born on December 28, 1926 in Pendleton County, Kentucky, she was the daughter of the late... View Obituary & Service Information

The family of Mildred Wagner Golden created this Life Tributes page to make it easy to share your memories.

Mildred Wagner Golden, 92, of Augusta, KY , passed away on Thursday,...

Send flowers to the Golden family.