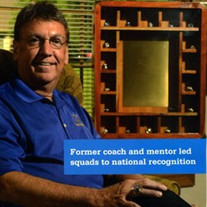 Myron Lee Doan, 64, of Butler, KY, passed away on Sunday, June 22, 2014 at the St. Elizabeth Healthcare Center in Edgewood, KY. Born on August 10, 1949, he was a son of Mary McDaniel Doan and the late Clyde Doan. He was an elder and music director at Mt. Moriah Christian Church, member of the Falmouth Rotary Club, president of the Pendleton County Education Foundation, and very active in community and government. Most notably, he was retired from Morehead State University as Dean of Students and Cheerleading Coach. After completing his Bachelor in Music and Masters Degree from MSU he worked at the campus radio station and later named assistant to the vice president of student life. He worked his way up to assistant dean of students and later became dean of students. In 1979 he became the coach of the coed cheerleading squad and in 1988 Morehead won their first national championship under him. During his career they captured 13 National Championships. An all girl squad was added in 1994 and he coached them to 6 National Titles. Myron’s career was one of the most celebrated in the world of collegiate cheerleading. In 2006 the gymnastics center at MSU was named “The Myron Doan Cheer Practice Room” in his honor. He was named Cheerleading Magazine’s coach of the year in 2002 and was inducted into the MSU Alumni Hall of Fame in 2004. He retired in 2004. He is survived by his mother; Mary McDaniel Doan of Falmouth, KY, a brother; David (Karen) Doan of Cold Spring, KY, a niece; Amanda (Jim) Gastright, a nephew; Matthew (Emily) Barker, and great nieces and nephews; Brendan Barker, Liam Barker, Norah Barker, Mitchell Gastright, Jacob Gastright, and special friends; James Joyce and Carl Blackburn. Funeral services will be held on Thursday, June 26, 2014 at 1:00 P.M. at the Pendleton County High School gymnasium with Bro. Darrell Breeden officiating. Pallbearers for the service will be James Moore, Billy Humphrey, Ryan McGovern, Scott Bell, Tony Nash, Jared Young, Mark McTague, Ron Pies, and Craig Monte. Honorary Pallbearers will be current and former cheerleaders. Burial will follow in the Short Creek Cemetery. The visitation will be held on Wednesday from 4-8:00 P.M. in the gymnasium. Memorial contributions are suggested to the Mt. Moriah Christian Church Building Fund: 314 Hwy 17N, Butler, KY 41006 Online condolences may be sent to www.woodheadfuneralhome.com

Myron Lee Doan, 64, of Butler, KY, passed away on Sunday, June 22, 2014 at the St. Elizabeth Healthcare Center in Edgewood, KY. Born on August 10, 1949, he was a son of Mary McDaniel Doan and the late Clyde Doan. He was an elder and music director... View Obituary & Service Information

The family of Myron Lee Doan created this Life Tributes page to make it easy to share your memories.

Send flowers to the Doan family.