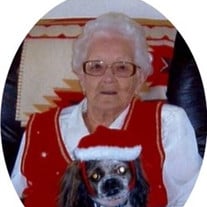 Rosalee Anna Rice LaFollette, 91, of Falmouth, KY, passed away at her home on Friday, August 29, 2014. Born in Pendleton County on June 24, 1923, she was a daughter of the late Laben and Ada Hodge Rice. On June 6, 1938, she married Carlos I. “Shorty” LaFollette , and her husband of 56 years preceded her in death on March 3, 1995. She was a sales associate with the former Arnold’s Variety Store, the former Pressman’s and Lerman’s Department Stores, a member of Mt. Moriah Christian Church, where she was active with the Ladies Aid, and a former treasurer and member of the Pendleton County Democratic Woman’s Club. She took an interest in historic cemeteries, soliciting funds to restore and care for them. In addition to her parents and husband, she was preceded in death by 3 sons: Charles Donald LaFollette (Feb. 1, 2010), Johnny Ray LaFollette (July 19, 2013), and Robert Allen LaFollette (Nov. 16, 2013); and a grandson, Chad Turley (May 26, 2011). She is survived by 6 of her children: Judy Hopkins of Falmouth, KY, Kathy (Larry) Turley of DeMossville, KY, Margie (Kenneth) Dunaway of Flemingsburg, KY, Tom (Pat) LaFollette of Butler, KY, Bill LaFollette of Visalia, KY, and Kenny (Paula) LaFollette of Falmouth, KY; 16 grandchildren; several great and great great grandchildren; her special caregiver, Brenda Christian; and two devoted friends, Ginny Manley and Kathie Moreland; and a host of extended family and friends. Rosalee was the last of her immediate family. The funeral service will be held at 11am, on Monday, September 1, 2014, at the Woodhead Funeral Home, Falmouth, with Bro. Darrell Breeden and Marvin Sullivan officiating. Serving as pallbearers will be Steve LaFollette, Labe LaFollette, David Wright, Vincent LaFollette, Jeff Turley, Scott Cornelius, Bill LaFollette, and Kenneth LaFollette. The visitation will be from 3-7 pm on Sunday, August 31, 2014, at the funeral home. Memorials are suggested to the Mt. Moriah Christian Church, 314 Hwy 17N, Butler, KY 41006 or the Riverside Cemetery, 1864 Hwy 330W, Falmouth, KY 41040. Interment will take place in the Riverside Cemetery, Falmouth.

The family of Rosalee Anna Rice LaFollette created this Life Tributes page to make it easy to share your memories.