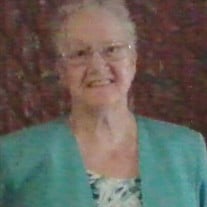 Ruby Aulick Plummer, 79, of Falmouth, KY, passed away on Monday, October 23, 2017 at her home surrounded by her family. Born on October 14, 1938 in Falmouth, KY, she was a daughter of the late Edgar and Mabel Johnson Yelton. On May 19, 1957 she married Kenneth Ray Aulick and he preceded her in death on October 31, 1994. On December 9, 2000 she married James Plummer and he survives her passing. She was a lifetime member and faithful servant of the Falmouth Wesleyan Church. Ruby was a seamstress and worked for Dr. Scholl’s and Unique Furniture where she stitched and repaired anything from shoes to Covers for couches and chairs. She also helped build strength and confidence to handicapped people at Southern Elementary School and NorthKey. In addition to her husband Jim, she is survived by 5 children; Douglas (Donna) Aulick of Falmouth, KY, Steven (Darlene) Aulick of LaFayette, TN, Cynthia (Marc) McDonald of Lexington, KY, Sandra (Steve) Dennie of Falmouth, KY, Scott (Missy) Aulick of DeMossville, KY, 4 stepchildren; Melony Gaines of Taylor Mill, KY, Tammy Tracy of Taylor Mill, KY, Rusty Plummer of Covington, KY, Anita White of Cincinnati, OH, Margo DeNuccio of Milford, OH, 11 grandchildren, 8 great grandchildren, 2 sisters; Ruth Helen Brandenburg , Emma Jean Thayer , and many extended friends and family members. She was preceded in death by a brother; Richard Yelton and a sister; Frances Louise Linvile.

The family of Ruby Aulick Plummer created this Life Tributes page to make it easy to share your memories.

Ruby Aulick Plummer, 79, of Falmouth, KY, passed away on Monday,...

Send flowers to the Plummer family.