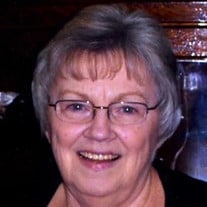 Vivian Elaine McDowell Marquardt, 67 , of Falmouth, passed away on Tuesday, April 19, 2011, at her home. Born on November 22, 1943 in Neave, Kentucky, she was the daughter of Shelby McDowell and the late Mabel Austin McDowell, who preceded her in death on March 21, 1977. She retired from North Key Community Care after 27 years of service, and she was a member of St. Francis Xavier Church and the Ladies Auxiliary of the Falmouth Volunteer Fire Department. On July 27, 1962, she married Charles Allan Marquardt, Sr. (Tinker), and her dear husband survives her passing. In addition to her mother, she was preceded in death by a brother, Kenneth Wayne McDowell on July 18, 2005. In addition to her husband of 48 years, Charles A. “Tinker” Marquardt, Sr., she is survived by three children: C. Allan Marquardt, Jr. and his wife Gina of Taylor Mill, Kentucky, David W. Marquardt and Sonya R. Workman and her husband Lee, both of Falmouth; 7 grandchildren: Kymberleigh Marquardt, Ryan Marquardt, Korey Workman, Taylor Marquardt, Kelsey Workman, Alex Marquardt, and Kody Workman; 2 great grandchildren, Brayden and Kayden Marquardt; her father, Shelby and his wife Norma McDowell of Falmouth; two brothers, Tom McDowell and his wife Brenda of Erlanger and Mike McDowell and his wife Kathy of Falmouth; and a host of extended family and friends. Mass of Christian Burial will be held at 11:00 a.m. on Tuesday, April 26, 2011, at the St. Francis Xavier Church, 202 Second Street, Falmouth, Kentucky 41040. The visitation will be from 4-8:00 p.m. on Monday, April 25, 2011, at the Woodhead Funeral Home, Falmouth. Interment will take place in the St. Francis Xavier Cemetery, Falmouth. Memorials are suggested to the Vivian Marquardt Memorial Fund c/o Charles A. “Tinker” Marquardt, the proceeds of which will be used to erect a remembrance plaque or picture at St. Francis Xavier Church in Falmouth, or the Falmouth Volunteer Fire Department.

Vivian Elaine McDowell Marquardt, 67 , of Falmouth, passed away on Tuesday, April 19, 2011, at her home. Born on November 22, 1943 in Neave, Kentucky, she was the daughter of Shelby McDowell and the late Mabel Austin McDowell, who preceded... View Obituary & Service Information

The family of Vivian Elaine Marquardt created this Life Tributes page to make it easy to share your memories.

Send flowers to the Marquardt family.