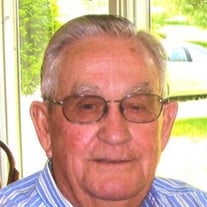 William “Will” Jacob Ritter, Jr., 89, of Falmouth, and a lifelong resident of Pendleton County, passed away on Sunday, March 6, 2016, at the Baptist Health Lexington. Born on February 11, 1927 in Pendleton County, he was a son of the late Edna Hobday Ritter and William Jacob Ritter, Sr. On August 23, 1952, he married Margaret Jones Ritter, and his dear wife of 63 years survives his passing. Will was a truck driver for the George Weidemann Brewing Company until his retirement in 1983, a U.S. Army veteran of WWII, a member of the Falmouth Baptist Church, a 25+year cancer survivor, a member of the Woodmen of the World Lodge, Chapter 611, and a member of the Hardin-Browning Post #109. Remembered as a loving, devoted, and caring husband, father, grandfather, and brother, Will enjoyed his farm after his retirement, along with watching and playing sports, working crossword puzzles, and reading. In addition to his wife, Margaret Jones Ritter, he is survived by his daughter, Deborah (late Ron) Ritter Mills of Nicholasville, KY; his son, Michael Dale (LaDonna) Ritter of Richmond, KY; his granddaughter, Sarah; his sister, Mildred Showalter, of Falmouth, KY; and a host of extended family and friends. In addition to his parents, he was preceded in death by his brother, Wilbur T. Ritter; and 4 sisters:   Lucille Abernathy, Virgiline Moore, Ruby Doggett, and Hazel Hamm. The funeral services will be held at 1 pm, on Wednesday, March 9, 2016, at the Woodhead Funeral Home, Falmouth, with Bro. Cohen Copley officiating. Pallbearers for the service will be James Crigler, Jason McGuire, Gary Showalter, Jim Gray, Tony Worrell, and Gary Price. The Honorary Pallbearers will be Carol Houchen, Carl Blackburn, David Sydnor, and Kenny Roberts. The visitation will be from 11-1 pm on Wednesday preceding the service at the funeral home.   Interment, officiated by Don Mays, will take place in the Riverside Cemetery.

The family of William Jacob Ritter created this Life Tributes page to make it easy to share your memories.

Send flowers to the Ritter family.